You had to be pretty damn brave this weekend to venture out and partake of the 1st Annual NYC Hot Sauce Expo (it was amazing, so I’m pretty sure that “1st Annual” is not just wishful thinking). First off, it was eff-ing freezing! Stationed along the banks of the East River in Williamsburg, the Expo offered no cover from the elements (including intense sun; memo to self: don’t forget the sunscreen even when it’s 37 degrees). The only respite from the windchill on Saturday and the plummeting temps on Sunday was for VIP ticket holders who were able to access the indoor amenities of 110 Kent Avenue, a super cool space adjacent to East River State Park.

Second, you had to be prepared to be scorched and burned by the end of the eight-hour event. More than 40 hot sauce vendors from Portland (Oregon) to Chicago to Dallas to Vermont and everywhere in between were there to seer you with Scoville levels that were off the charts for 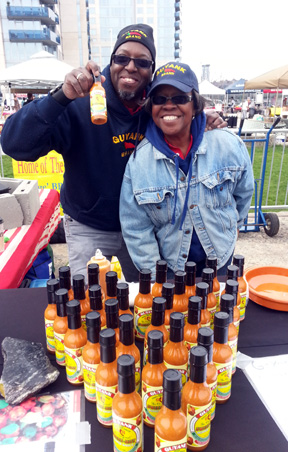 I tried to pace myself on the spicy. When I want to be in pain, well, let’s just say I have a different avenue over ingesting hot sauce. And there were plenty of mild, medium and hot options to please. Among my favorites were the offerings of NW Elixirs  (Andrew—who is as hot as his sauces—won four Screamin’ MiMi Awards, including first place in the Jalapeno Hot Sauce category), Guyank (who only had to drive down from Queens), and Defcon Sauces, although there were so many great and varied offerings, it’s almost impossible to pick among them. 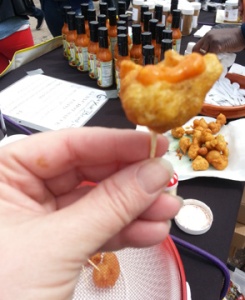 There was a lot of food to sample from. In addition to brisket and sausage for sale, samples of cookies (yes, hot sauce laced macarons!), taffy (the spicy peanut butter from Peppers was my favorite, along with the colorful Chip Hearn, who kept changing hats as the day progressed; at one point he wore what looked like a stuffed chicken on his head), jalapeno chips dusted with ranch, the seasoning of NYC Hot Sauce Company (Jon Bratton was sprinkling cucumber with a dried out pepper pulp spice that soon may be replacing Old Bay in many a cupboard), pepper jams and jellies, and peanut brittle, which apparently was so spicy it made at least one writer covering the event physically ill.

When it came t 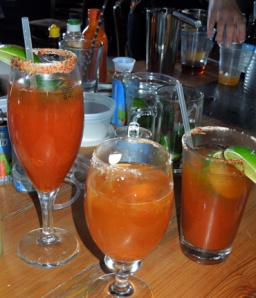 o the beer, there was a nice, albeit small, variety of craft from which to choose, including a recent addition to the NYC market from Texas, Shiner Beer. New York was represented well by Captain Lawrence and Empire, with the Coney Island Pilsner rounding out the Brooklyn vibe. Other cool Brooklyn offerings came courtesy of the VIP area, where Widow Jane Rye was being served. Bartenders competed for title of best beer cocktail in a  Corona/Modelo Michelada (beer Bloody Mary) Competition, while the real thing was served up courtesy of Tito’s Vodka. In the latter category, bragging rights go to Tony of Bushwick’s Pine Box Rock Shop. At one point I took my scorpion sauce (rated 1,000,000 on the Scoville Scale) and added an artisanal vodka from Berkshire Mountain Distillers (expect to hear more from them in the news soon – the Bitch has the scoop, so stay tuned!).

All the capsaicin aside, the coolest part of the Expo was the personalities. I’m not a hot sauce insider, but these people really know their stuff. Some of them were rock stars of the hot sauce scene (literally in the case of the heavy metal guys out in force, autographing their bottles). And when Tom of Tom’s Roid Rippin hot sauce won first place in the Novelty category, he literally had tears in his eyes, having for the first time been officially acknowledged by his peers (the hot sauce judging had taken place several weeks in advance of the Expo). And these guys and gals really seem to have a good time and are characters in and of themselves. It was not for nothing that one of the Screamin MiMi Awards went for Best Label Artwork.

These hot sauces are culinary works of art, and I look forward to enjoying the products I bought at the Expo. Just as soon as my tastebuds get back to normal. The Bitch is orgasmic about the 1st Annual NYC Hot Sauce Expo. I give it five ghost peppers!