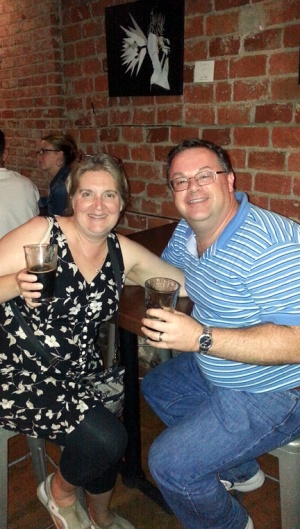 This is what 30 years… and 30 pounds… looks like! Living it up with my personal tour guide in San Diego!

I ended up coming to this year’s Beer Bloggers Conference in large part owing to the location. While I thoroughly enjoyed BBC13 in Portland, ME, last year, the easy (and fairly inexpensive) transportation was a key reason for my being in attendance. There is nothing easy about getting to San Diego from NYC (okay, well, there are plenty of non-stop flights, so it’s not like I was gonna walk here), but I had never been to the city and it was certainly on my bucket list to get out here and try some local SoCal brews.

My initial impression of the beer scene here is that it’s light years ahead of NYC. The very first beer I had was at Council Brewing Co., a nano-brewer run by (female! yay!) brewmaster Liz Chism. Chism, who works the brewery along side her husband Curtis, is a sign language interpreter by day, amazing homebrewer by night. I was stunned to hear that she had no formal training, because her beers are truly outstanding. This isn’t to say that homebrewers don’t make outstanding beers, only to say that these beers would stand up against any eastern large brewers’ beers.

My friend Brian, who I hadn’t seen in 30 years, took me to the off-the-beaten-path brewery housed in an industrial park. I started with a flight that included three different IPAs. While their homonymic IPA, Chizzam!, was outstanding, it was their Quorum IPA with Jarrylo Hops that was bringing in the locals (it had just been poured). I’m a beer lover and not a judge, but this was the least IPA-tasting IPA I think I’ve had. There was zero nose; I mean, like, none! Even Liz admitted to a low-scent beer (it was getting busy at that point, and I was more interested in catching up with my friend than quizzing the beer maker, but I’m guessing no additional hops added to the fermentation). Even the flavor was not overly hopped. The Yakima Valley experimental hop (pronounced yar-I-lo with emphasis on the “i”) is very subtle, despite having a relatively high AA (~15%). I would have guessed it was a hoppy Belgian style ale, and not an IPA at all.

But it was the third entry, their Gavel Drop IPA made with New Zealand Nelson Sauvin hops that made me feel like I was no longer in Kansas—er, Brooklyn—anymore. Very intense aroma and taste. Initially, after the subtlety of the Chizzam!, I was put off by it. But after finishing the delicious (and deceptively high in alcohol) Pirate’s Breakfast Imperial Oatmeal Stout, the Gavel Drop really grew on me.

Moving on, Brian took me to Tiger!Tiger! where I paired Hops of Hope by Noble Ale Works (again, outstanding) with a spicy house-made bratwurst and poutine (which was the only thing that was less-than-impressive). Already pretty tipsy at this point, I was escorted around the corner to the wickedly named Belching Beaver (sadly, they were out of the ladies’ tank tops), where I managed to chill my palate with one of their famous milk stouts (I had the Peanut Butter, a great dessert beer).

Brian told me that even though Council opened three months ago (their grand opening was a mere two months ago), they are far from the newest brewery in San Diego. I don’t know much about the politics to opening a brewery in California, but the quality and quantity of beer means that I will be able to dip my toe into the waters but slightly. I’m going to head out in a bit to explore some more (this is my only full free day, and I’ve spent the entire morning working). Can’t wait to see what further treats the craft beer world of San Diego has in store for The Bitch!