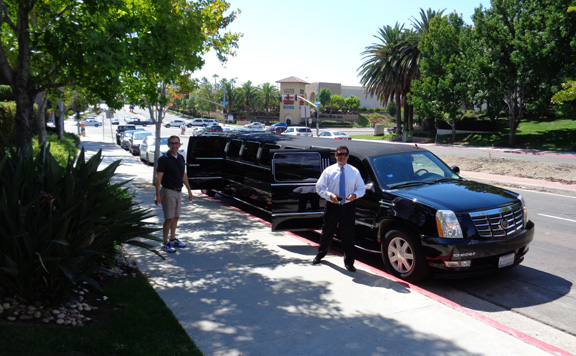 One of the things I really enjoy about craft beer people is the age range (I wish I could say I enjoy the diversity, but with a few notable exceptions, we’re largely a majority-male, white, educated group). However, I’m certainly in the mid-age range and I remember Gilligan’s Island fondly, a sitcom based on the notion that a group of strangers head out on a boat for a three-hour tour, only to get caught up in a maelstrom and lost to a desert isle. Without going too far into the premise of the show, Thursday in San Diego was reminiscent, as about a dozen beer bloggers showed up a day early to take a six-hour tour courtesy of APlus Limos and led by our generous host, Michael Puente. Thanks to APlus, we could get around to see more of the amazing breweries San Diego has to offer, including:

Along the way, we also stopped by a Mexican fast food place; the verde burrito might have been the best I’ve ever had (dunno how I will be able to eat Brooklyn Mexican ever again!). While any of the venues (Council Brewing was also a stop, but I had already drank my way through most of the line-up on Tuesday) would warrant its own blog post, I have to say that White Labs was the most unusual and delicious stop.

For those who may not know, White Labs is the premier harvester of yeast in the U.S., possibly even the world. Their scientists have written the definitive book on yeast, and their tasting room offers up beers named by style and yeast strain (hence, the best beer I’ve had thus far, a porter on cask with the designation WLP028). You can also order a flight of a particular style of beer with four different yeast strains. My porter flight included:

I also drank the Frankenstout, an eighth generation beer that is made using all 96 varieties of White Labs yeast (don’t ask me how they manage, only that we joked about a sterile mop!). The thought that there are that many yeast strains in a single beer is somewhat outside the scope of my mind to encompass, but the beer was great.

In fact, White Labs (which has long been on my bucket list to visit, and partially why I decided to come to San Diego for the Beer Bloggers Conference) really illustrates the brewers axiom: Brewers make wort; yeast make beer. The variety of flavors among the same beer with different yeast was incredibly broad. I would happily go back to White Labs just to try their flights on a regular basis. As it stands, I have APlus to thank for getting me there safely and in comfort… along with 13 of my beer blogging buds.