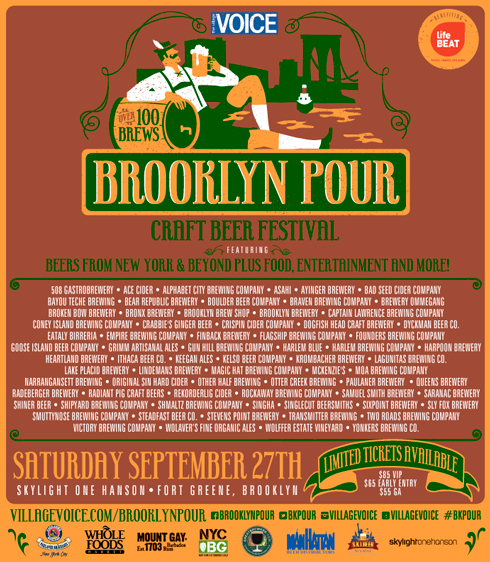 So, it’s not too late to get your Oktoberfest going, and there are two “the bigger the better” drinking events upcoming with a Brooklyn focus that really look to be worth the price of admission (sadly, The Bitch will not be in attendance at either of them: In the case of the former, I’ll be raising my glass to toast friend and NYC beer event savant, Chris O’Leary’s fifth anniversary of his blog—in my best Rowan Atkinson impersonation: It is so much more than a blog—Brew York, New York. In the case of the latter, I’ll be at GABF).

First up is this weekend’s Brooklyn Pour. Put on by the Village Voice and held in Williamsburg(h)’s historic bank (you know the one I’m talking about if you take the J/M or bike/hike across the Williamsburg Bridge), Brooklyn Pour is one of the better-produced large-scale drinking fests. The Voice (almost) always manages to get the perfect balance of vendors, and this year’s Brooklyn Pour will feature some excellent European brews (two words: Ayinger Marzen) in addition to hyper local beers from new breweries like Braven (which is slated to open sometime this fall; local boys doing the gypsy thing). In all, they’ll be serving up more than 125 beers from 70 breweries.

Note that tickets will only be available online until tomorrow (Friday, September 26th) 2 p.m., so buy yours before the door price tacks on an extra $10. And while I don’t often recommend VIP, for Village Voice events, the cost is worth it: you get in an hour early, so you’ll miss the long lines (if you pay VIP, obviously, show up before the VIP doors open at 2 p.m.) plus you get your food included. Tickets are $85 for VIP (four-hour tasting) or $55 GA (3-6 p.m.; food available for additional purchase). Get them here.

On the day after GABF wraps in Colorado (October 5th), the inaugural Brooklyn Local Craft Beer Festival will take place at 420 Carroll Street in the trendy Gowanus/Carroll Gardens crossover neighborhood in south Brooklyn. Weirdly, despite being a stone’s throw from The Other Half, the BLCBF thus far has no actual Brooklyn artisanal craft breweries on the line-up. While I support their efforts to get away from the Brooklyn behemoths (including, well, you know, Brooklyn! as in Brewery), it’s odd to me that a festival calling itself Brooklyn Local Craft doesn’t have any. I’m hoping that a few more truly local brewers will come on in the final week leading up to the event.

Which isn’t to say the event won’t have some very cool, lesser known craft beers. It will. Most interesting among them is Long Island’s (kinda like Brooklyn, I suppose) Lithology Brewing Co., which currently is only serving its beer on the festival circuit (they expect to open their brewery to the public in early 2015). And for those of us who live in Brooklyn, this is also your opportunity to get some great brews from The Bronx (Gun Hill Brewing), Queens (Finback) and Staten Island (Flagship) without a two-hours-in-each-direction commute. They’re also offering punch cards for logging your brews, a very handy thing to have when you get too buzzed to do a proper Untappd check-in. GA tickets are $47.50 (including the fee) for six hours of drinking (noon to 6 p.m.). Food is available for additional purchase.

So, enjoy Brooklyn while I’m drinking in Manhattan and Denver! Have one for The Bitch.