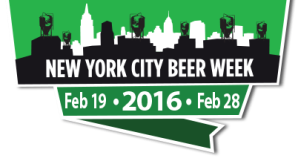 A few years back, I tried to “do NYC Beer Week” and cover as many of the events as I possibly could. Not only was I utterly exhausted by the end of the week, I came to the conclusion that NYC Beer Week was not the best week of the year to celebrate beer in NYC.

However, a lot of press and time and effort goes in to this annual celebration, so here’s my view on the upcoming “week” (like so many beer weeks, it’s actually 10 days to encompass two weekends): the good, the bad, and the downright ugly.

For the past couple years (since the enactment of the NY State Farm Brewery law), there has been a push for NYC Beer Week brews to be made with local ingredients. Hence, the SMASH beer, which normally stands for Single Malt and Single Hop, but is appropriated for NYC Beer Week as State Malt and State Hop. Brewers challenge themselves to create a simple, state-ingredient beer that can be enjoyed by everyone coming to the city. It’s perfect: No fuss, no frills. And about a dozen bars (including Alewife NYC, Banter, Greenpoint Beer & Ale Co., Jimmy’s No. 43, Murray’s Cheese Bar and Randolph Beer) have agreed to tap and toast a SMASH beer tonight (Friday, February 19th) at 7PM.

Yes, I do help publicize this event. But it’s also my favorite event not just of Beer Week but of the entire year. In addition to the aforementioned SMASH brewers, Brewer’s Choice invites many brewers from the state and beyond to create unique beers that will be available only for one night. This is not your usual suspects kind of event where everyone is getting—you’ll excuse the pun—smashed. You’ll also get the opportunity to hang out with the brewers themselves. Plus the event offers up about a dozen food purveyors serving everything from tacos to oysters on the half shell, all included in your $80 ticket (and they’re almost sold out so get yours here).

You can double your fun this year by slipping out after 7 PM to KelSo next door and partake of a specialty whiskey tasting from the Caskmates collection: the Jameson Caskmates KelSo Pale Ale Edition. While we’ve all heard about beer being aged in whiskey barrels, this whiskey has actually been aged in a KelSo beer barrel! It’s available in limited quantities, so if you see something, drink something!

Ever since the untimely closing of d.b.a. in Brooklyn, NYC has gone without a proper cask festival. This year’s official closing party resurrects the best way to enjoy beer: gas free and at a proper temperature! Enjoy about 150 casks and light eats, while mingling with the makers. Two sessions will take place on Saturday, February 27th, and there are plenty of tickets (both VIP and GA) remaining for both.

This could go under “The Ugly” as far as I’m concerned. Who thought a booze cruise in February was a good idea? Well, the NYC Brewers Guild actually dodged a major bullet. After record-breaking low temps last Saturday, they’re looking at mid-50s tomorrow, Saturday, February 20th, for their two sailings. And in a surprise to no thinking person, tickets are still available for purchase here. As for me, I’m waiting for the real spring to arrive before heading out to drink in the bay under the Statue of Liberty.

In general, there are fewer events being promoted this year and only a handful of them are interesting. Most of the events are just “themes.” A handful of beer dinners. I feel like there’s not a lot of substance or sizzle to the official event listings, but  Shmaltz is premiering their Vulcan Ale as a part of Astronomy Night on the Intrepid this evening (2/19 at 7PM). Bring your favorite Klingon to drink well and prosper. Another event that could be of interest is a Kick-Off Panel  at DBGB’s on Sunday, February 21st from 5-7PM, featuring Garrett Oliver (Brooklyn Brewery), Kelly Taylor (KelSo) and Benjamin Weiss (The Bruery).

In the past couple years, the Brewers Guild has been tweaking how they run and publicize the week, but the growing pains should be in the past. The truth is I hear nothing positive about being a part of NYC Beer Week from the people who really matter: the bar owners and industry insiders who might want to put money into being a sponsor at a Beer Week event. The Guild has decided that NYC Beer Week is really Beer Made by NYC Brewers Week. It’s not about the bar owners or non-guild members. And while this could be a great mission statement, it’s not really flying with anyone. Late last year I heard about a collaboration attempt from the NY State Brewers Association to have an event revolving around “country brewer/city brewer” beers, where upstate breweries would collaborate with city breweries to bring new beers to the market for beer week. That sounded like an awesome idea! But if it happened, no one is publicizing it. I just don’t believe the NYCBG has the bandwidth to undertake a SMASH beer project and a larger collaboration project. The SMASH beers are great, but it’s just a weekend idea. You cannot build 10 days’ worth of programming around this.

How to Right the Ship

Before the NYCBG bought out the original beer week, it was held every September. Bar owners seemed to love it, because that was when business tends to be “off.” We NYers are generally spending the fall outdoors, not in bars. The weather is amazing for a few scant weeks in NYC, and September is one of those months. NYC Beer Week in the fall would encourage people to come indoors, and bar owners would probably drum up some great programming to attract more attendance. In February, business is generally good—random 3-feet blizzards aside—and bars don’t need to allocate resources to come up with clever ideas to attract business. Maybe that’s why this year’s events seem so ho-hum.

Nearly all the non-gypsy brewers in the city now have tap rooms. Yet almost no events are planned at any of the tap rooms during NYC Beer Week. Even the aforementioned Jameson event at the KelSo tap room is a whiskey outing. Some breweries (e.g. Bridge and Tunnel) are having ad hoc events as a part of their regular business. It seems like this is a wasted opportunity when places like Other Half routinely have lines around the block trying to get a new beer release. If the NYCBG is about the actual breweries, shouldn’t more events be taking place at the breweries?

I have long suspected that a major problem with the Guild’s version of NYC Beer Week is “too many generals, not enough privates.” If all you have is everyone looking out for his or her own brand, you’re unlikely to build a beer week of substance. I never hear anyone saying, “Let’s go to NYC for beer week.” Yet, I do hear it about San Francisco, Asheville and—especially here in NYC—Philadelphia. We need to figure out how to make NYC Beer Week “destination worthy,” and then have the troops in line to implement the strategy that the higher-ups devise.

Otherwise, the impetus for getting out to drink over the next 10 days is really just “business as usual.” And no matter the quality of the beer scene, that’s no reason to celebrate our city’s beer culture.