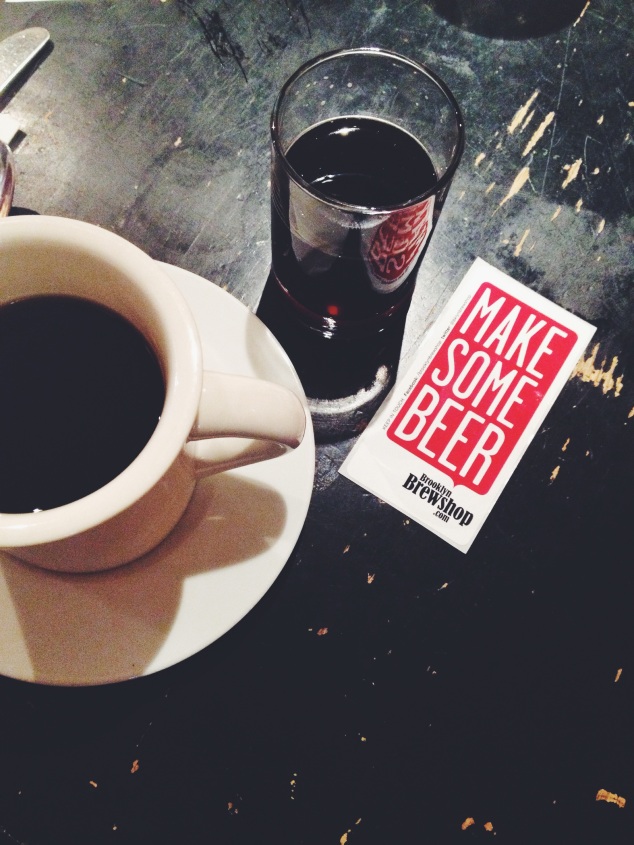 So, tomorrow marks the start of NYC Beer Week. Earlier today, I was at 508 Gastrobrewery talking with Chris Cuzme about the state of beer in NYC while drinking the new Coffee & Donut Stout, a yummy 6.7% ABV collaboration brew that launches EST Beer, a new commercial brewing company from the co-founders of Brooklyn Brew Shop.

When surrounded by knowledgeable beer folk, it’s easy to forget that there are many in the NYC Beer Community that want NYC Beer Week to cater to the wine and whiskey crowd, as I like to call them, people who are either new to craft beer or are not the typical beer drinkers. And there are a lot of tastings and tap takeovers throughout the city that should be enjoyed by novice beer drinkers.

But with so many events on the calendar for the coming 10 days, which ones have a geek factor that savvy beer drinkers won’t want to miss? Here are my favorites (and be sure to check out my beer calendar here), listed in order, so you can serve yourself up with a non-stop barrage of the best beers NYC Beer Week has to offer:

Start things off early (they open at noon) at Spuyten Duyvil’s Big Woody 2014, where you can grab a couple big beers and wood-aged beers before sobering up and heading into Manhattan for New & Rare Beer Night: Wild, Barrel-Aged, & Rare Beers with Jonathan Moxey at Clinton Hall. This is an awesome chance to purchase some killer brews (you must RSVP for free, pay-as-you-go at event from 7-10:30 p.m.), including La Boheme, a wild sour beer brewed with Brett and Lacto yeasts, aged in red wine barrels for 2 years, and steeped in Michigan tart cherries for 6 months. They’ve got the only keg in NYC!
Other beers include Perennial Trixie, Heart of Gold, Sum Imperial Coffee Stout, among others.

Cuzme says the early session of CASKALOT: A Festive Celebration of NYC Cask Conditioned Ales at 508 Gastrobrewery is pretty much sold out. So sleep in and wander out in the evening for the session from 6-9 p.m.  $45 ticket here. Includes three hours of unlimited pours of cask conditioned ales by NYC Brewers Guild Brewers.

Dogfish Head Tap Take-Over at The Pony Bar (UES) With Head Brewer Tim Hawn. Meet the brewer with 20 lines and a cask of all your favorite Dogfish Head, vintage selections, and rarely seen specialties.

NYC Brewer’s Choice at the Wythe Hotel. From 6-9:30, brewers serving their own beer from nearly 30 breweries, including locally sourced grains in the following beers:

From noon on, hop the path to Jersey City for “Bridge & Tunnel” Night at Barcade. Consider this is great counter programming to NYC Beer Week in that they are featuring beers from craft breweries not available in New York. Beers include:

And on the way back, get your chocolate fix at ChocoBrewvana: The Chocolicious Beer Dinner at 508 Gastrobrewery. Cuzme pairs beers to a chocolate-themed dinner co-hosted by Clay Gordon, chocolate critic and founder of The Chocolate Life. Chocolate will be included as an integral component of every course, and each will be paired with a specific house made craft beer. This is a dinner unlike any other and is not to be missed. Ticket ($80 here) includes 6 courses and 6 beers. From 6:30-9:30 p.m.

This could be a his-hers night, or you can start out at New York Beer Company for the 2nd Annual New York State Brewers Convention with Blue Point, Bronx Brewery, Ommegang, Kelso and others starting at 5 p.m. and then head over to Glorietta Baldy in Brooklyn’s Crown Heights area for Women & Beer First from 7p.m. There will be specials lady-brewed beers with the brewers, homebrewers, and industry professionals representing some of the most popular craft breweries worldwide.

You’re in the homestretch, so might as well head over to one of the two Saturday sessions at the NYC Craft Beer Festival – Spring Seasonal event at the Lexington Armory. Go forth and drink from more than 150 craft beer offerings. Although if you want food and to avoid the crowds, go ahead and spring for the $125 VIP Connoisseur Lounge, where the lines are typically quite short and the chefs top-drawer. Tickets here.

Pre-game your Oscar party over at Mug’s Alehouse in Williamsburg at Split Thy Skull XV. All day Sunday, its big beers like tone Matt’s Burning Rosids Imperial Cherrywood Smoked Saison. 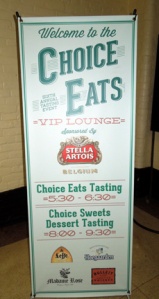 This past Tuesday I had the mixed pleasure of attending this year’s Choice Eats, the Village Voice’s annual tasting extravaganza. The spread was awesome, in the real sense of the word. Long lines aside, there was far more food to consume than could possibly be consumed by anyone who was not a competitive eater.

When I say that attending was a “mixed pleasure,” it’s because press at these things are always the bastard step children invited to dine at the grown-up table. If you’re just there to eat, drink and make merry, it’s a heck of a deal (although, at $50 general admission, the price for tickets was well worth what you got inside). However, if you really want to get to know the purveyors—there were more than 100 tables at the event, not including VIP—you’re pretty much unable to do this at the event itself. The best you can hope for is to grab a business card and follow up a day or two later.

I ended up in the VIP lounge for much of the early part of the expo, simply because the chefs and artisans had time to discuss their wares. Whether it was Kentucky Rye or Hawaiian Kona beer, the VIP experience was much more mellow than the main hall at the 69th Armory.

I’ve attended many of these freestyle expos, and this is among the best run. For every table that had a queue, there were several that you could walk up to and grab a sample. Options ranged from sliders to cupcakes, with more than two dozen beer, wine and spirits tables included.

Among the biggest surprise of the night was NYC Craft Beer Festival pouring Barrier Relief beer. This collaboration beer from Ommegang was among the first released to help Barrier Brewing Company in the post-Sandy aftermath. The beer held up well, and I was surprised to find it available. 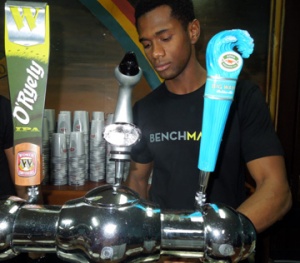 On the main floor, I was able to make it to the front of a dozen or so lines. My favorite taste of the night had to be the savory bun by Brooklyn Kolache Co. , a pork and jalapeno yumminess that almost makes me want to hop on the G train for more. In the VIP suite, the winner hands down was an entry from Jersey City’s Thirty Acres. Husband and wife team, Kevin and Alex Pemoulie, have a rotating menu and their Red-wine Marinated (soft boiled) Egg was a revelation. Served on a bed of salty croutons, buttery mâche (perfect with an egg), and topped with trout roe, this dish has been a mainstay on the restaurant’s brunch menu (sadly, it’s being rotated off). However, if the sample was indicative of their year-old restaurant, I’m planning a trip across (under?) the Hudson very soon. 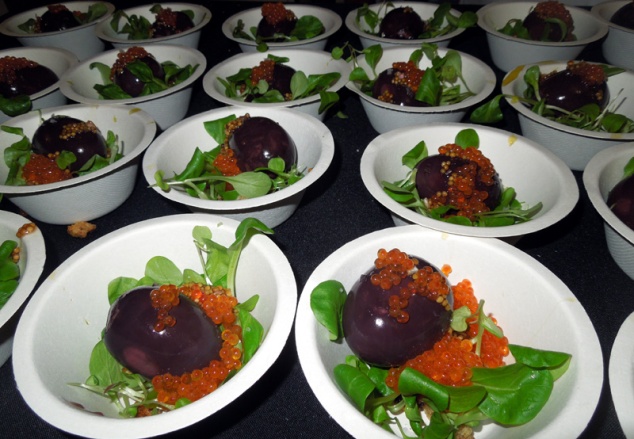 All in all, I’d say the Bitch is Ecstatic about Choice Eats, but as with any of these popular tasting events, the early birds (i.e. those folks who stood in line for an hour before opening) had the best time. And everyone who sprang for VIP.