Everything you need to know about Two Roads Brewing Co. in Stratford, CT, can be summed up by the famous last line of Robert Frost’s poem:

Two roads diverged in a wood, and I—
I took the one less traveled by,
And that has made all the difference.

At the end of Two Roads’ bar/tasting room, which on a recent snowy Saturday was packed to the glass overlooking a massive brewery, a mural has these exact lines from “The Road Not Taken.” Propped in front of the poetry is a circus cut-out (held up by four kegs, lest a tipsy drinker tip it over) where an imbiber can pose with her face “clothed” by a purple clown on a tricycle.

And brewmaster Phil Markowski would have it no other way.

Like the facility they occupy, the team behind Two Roads has combined experience of more than 100 years in the industry. Not a single business decision in their launch has been made in haste or whimsically (despite the aforementioned clown cutaway). Phil was New England Brewing’s original brewmaster; brewery partners Clem Pellani and Brad Hittle worked many years for Pabst, among other companies. CFO Peter Doering holds an MBA from Harvard and formerly was CFO of a large regional shipyard in CT. 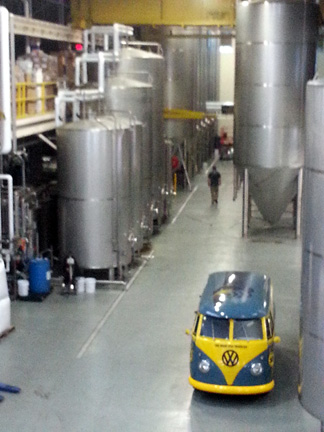 Perhaps its the team’s lofty background that gave them the audacity to build one of the nation’s largest craft breweries in the former U.S. Baird Company manufacturing plant. The age of the building is roughly 170. The size of the building? Well, it occupies a nine-acre lot… and not much of that is for parking. This facility is huge! You know those close-up shots that look life-size but are, in fact, diaramas? The brewery at Two Roads is the reverse of that. An airstream and a VW Bus sit on the brewery floor, looking like part a child’s Matchbox collection.

But in this case, size does matter. Because one of the “less traveled” aspects of Two Roads’ planning was that they wanted to be large enough both to grow as a business and to offer a space for contract/gypsy brewers. Phil referenced the many great brewers who don’t have their own brewery, along with the many micro-brewers who run out of space when their brand takes off. Two Roads addresses both issues through sheer enormity. It’s one of those places where the brewery tour will blow you away, even if you think you’ve seen it all.

And when you take the tour, make note of the environmentally conscious aspects. From the repurposed building itself (“There’s a strong industrial past in Stratford that we wanted to resurrect,” notes Phil on the tour, pointing out the original maple floors.) to the soon-to-be-installed solar panels, the company is a good steward in their community. While the facility harkens to an historical past, they don’t shortchange when it comes to modern innovation.

This includes the automation. Two Roads has one of a very small number of automated brewing systems in the world. Typically found in macro-breweries, the computerized control room looks like it belongs on Star Trek… or in an engineering facility at the very least.

But this, too, makes sense in Two Roads’ world: Both Phil and Clem left engineering jobs for beer. They are not just tech-friendly; they lived this life before they started brewing.

Which brings me to the beers. The company philosophy can be tasted in the brews, many of which add unusual versions of expected ingredients (i.e. the beer has “something” but it’s not weird or off-putting). Thus, the Ol’Factory Pils (named after the “old factory” in which it’s brewed) is a traditional pils with the hops you’d expect (i.e. a combination of German and American varietals), but they dry hop the beer after fermentation. Their Worker’s Comp Saison is available both year-round and in six-packs, instead of packaged seasonally in large bottle format typical of most saisons. Each beer has a “twist” to it; every beer is named with deliberation (the Henry’s Farm Double Bock is named after Brad’s grandfather, who used to brew a dopplebock every season on his midwestern farm).

The brewery is BYOF (you are welcome to carry in food, purchase from one of the food trucks outside the facility, or call in for take-out), and they have no intention of diverting their focus from making great beer (i.e. no kitchen in the plans). What they do hope to offer is transportation from the Stratford MetroNorth station (one way is approximately 90 minutes). Maybe they’ll even pull out that awesome VW Bus to do so.

Two Roads Brewing Co. is launching in Manhattan today (2/19) at Blind Tiger and in Brooklyn tomorrow (2/20) at The Owl Farm. You can also get growlers from some of the bottle shops (Beer Street on north Graham in Williamsburg has Road 2 Ruin DIPA, for example). All photos can be seen in my Facebook gallery (please like my page!).