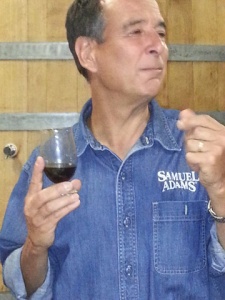 While it’s far from original to have a year-end post, I do think that this generally is a time for reflection. Rather than a breakdown of my 10 (or 50) favorite beers, I thought I would recall some of the best beer moments I had this year. Dates are rough (because, you know, I was drinking at the time). Enjoy your beer, see you in the new year!

In some ways, I feel like I’ve been The Bitch (pun intended) a lot longer than I actually have. I have a strong tendency to measure myself by my failures rather than by successes. When I see “only” 35 posts here and how little I’ve fleshed out this blog over the past nine months, I have to remind myself that this is a brand new venture for me. And in addition to this platform, I’m pretty active on Twitter (where I have almost 400 followers, many of whom are big time beer peeps) and I’m starting to get a “name” for myself.

In truth, the whole Brooklyn Beer Bitch idea came from a place of desperation. I’d been swimming against the current of my own stream with regards to the whole “beer writer” identity. I don’t know why it took me so long to accept that being a beer writer is a great thing, and it doesn’t preclude me from being an author of fiction or memoir. It is where I make the butter to go on my bread, so to speak. As I came into acceptance, I was also struggling financially (beer writing pays for the butter, not the bread… sometimes it doesn’t even pay for the beer!). I was really depressed at the start of 2013, and—as is my wont—I couldn’t see a clear path through the chaos that is my life.

In February, I did something I hadn’t done in a very long time: I went for a very long walk. I used to walk miles and miles, typically around the Island of Manhattan, where the parks department has created something of an urban oasis (nearly the entire 32 miles can be walked along the riverfronts). However, I hadn’t kept up with the walking, which is very solitary when you don’t have a walking buddy (and my life is already solitary enough, thanks very much!).

Anyhow, it was on this walk that I had some time to contemplate what was making me so unhappy. The epiphany came when I realized what was really making me feel so down and out of control was the thought that I would have to move away, that I simply couldn’t (cue Frank Sinatra) “make it (t)here.” And while I basically loathed the four years I had lived in Manhattan, I actually like living in Brooklyn; I appreciate the vibe and the people and the diversity that is pretty much gone from my western neighbor borough. I had always viewed NYC as a weigh station between my old life that I thought I was going to have until “death did us part” and the next chapter that would take place in a location one hell of a lot less insane than here. The thought that I would miss Brooklyn and not be happier elsewhere came as a shock. However, with this realization also came a moment of clarity… If the thought of moving away from Brooklyn was bringing me down, the solution was simple: Don’t move.

On a parallel note, I had long back-burnered how to capitalize on the good work I had been doing writing about beer. I had vacillated between merging and separating my various writing identities, especially with regards to platform building, which is a lot harder than just doing the writing itself. Suddenly I knew what I wanted to do: Become the Brooklyn Beer Bitch. Merge with the city that I didn’t want to leave. Marry myself to this idea of staying in Brooklyn indefinitely.

As soon as I got home, I checked the URL and found that it was available. As so often happens when you ask the Universe for a solution, one presented itself. Of course, that solution has not been without ups and downs, but I haven’t even been doing this for a year! I think good things will come in 2014 (see below).

I attended two writers’ conferences this year, and this was the second—and more financially rewarding (duh, beer writer!)—of the two. Not only did I make new friends both personal and professional and connect to some very cool industry peeps, I strengthened ties to my existing pro community. And although I didn’t make the score that some did, I did manage to get a couple of gigs out of these meetups that I probably wouldn’t have found if I hadn’t gone. Somewhat not surprisingly, I never really wrote about the BBC13 (it was on the “to do” list), but I did write about pre-gaming up in Portland here.

I made some amazing friends and professional connections at the BBC, but if I had to pick one stand-out moment, it would be hanging out with Jim Koch in the barrel room at Sam Adams, sipping Utopias. I don’t even really consider this a beer moment, as Utopias is more like a fine liqueur. However, this will be one of those beer memories that will stay with me until my brain becomes non-functioning in one regard or another.

4. Getting my first national publication. – October 2013

In the November 2013 issue of All About Beer Magazine, I did an opinion piece that was heartfelt and revelatory (I even got some fan mail for it!). It’s one of my favorite beer publications, so I hope to write more for them in 2014.

This was the year I finally did it: I went camping! All joking aside, I don’t know if I’ll ever get another chance to go to Ommegang for their annual Belgium Comes To Cooperstown (BCTC) festival, but I hope to make it back if only to hang out with some of the most amazing beer peeps gathered in one place. You can relive the weekend with me here.

My goal is two blog posts per week, which may be unrealistic. As it is, I write regularly for four different blogs, so getting here twice a week may be more than I can schedule. That said, I do want to have a weekly post, so my goal in 2014 is to have at minimum 52 original blog posts each week (some reblogs to pad).

When I launched BBB, I didn’t plan on including an events section. Originally, I wanted to do some kind of podcast, but that requires more equipment and organization than keeping up with the blog, and we all know how hit or miss I’ve been there! When Mary Izett decided to move away from her “My Life on Craft” blog, the city lost one of its best resources for beer events. While I have yet to step into those big shoes, I hope to be more responsible about this moving forward. Goal #2 for 2014!

I originally got into beer writing with a book pitch, and it’s only taken three years for things to come full circle. I’m working on a pitch now (I recently pitched another solo title; this current pitch would be with a co-author), and I think it’s a book that isn’t already out there. My co-author already has a publisher interested, so I’ll keep you posted about this exciting development in my beer writing life.

This is a more general writing resolution, which is to pitch or submit to contests on a regular basis. Again, I would like to pitch one piece per week (either for a blog, a magazine, a contest or elsewhere), but even bi-weekly would be a bounce from 2013.

5. To launch a monthly newsletter.

I have way more contacts than I do followers, so this seems the next best way to build the platform. Feel free to unsubscribe. Some day.

Because, you know, it’s New Year’s. And I drink a lot of beer.

For New Yorkers, it seems like every other day there’s some incredible beer release or cool gathering. The whole “too many beers, too little time” can seem overwhelming, but there are certain times of the year when being a part of the beer scene is like running a marathon.

July Good Beer Month is certainly one of those times. For 31 days every July, NYC celebrates as the Mayor’s office delivers the July Good Beer Month Proclamation (if you want the audio version, listen here at the 30 minute mark for Garrett Oliver’s oration… it’s brilliant!):

Office of the Mayor, City of New York – PROCLAMATION

WHEREAS, July is Good Beer Month in New York City. And at barbecues and picnics and pubs and groggeries across the five Boroughs, our city’s residents and visitors are getting into the spirit and are beating the summer’s heat with cold beers. Even more refreshing is the fact that some of the best brews we have in the fridge and on tap are made right here in New York as our city’s craft beer scene continues to thrive.

WHEREAS, like any top quality product, good beer is the result of dedication of many people. Growing New York’s collegial, knowledgeable, independent beer community has required the passion and expertise of farmers, brewers, distributors, importers and devoted patrons alike. The community has also focused on keeping its industry sustainable and environmentally conscious. Brewers have formed partnerships with both city farms and local artisans, and foster the kind of conversations that keep their taverns and tasting rooms great places to share big ideas about what’s next in craft brewing.

The proclamation continues, acknowledging the Good Beer Seal bars (full disclosure, I blog for GBS). But what’s really cool is the Mayor’s support for five years and how craft beer has truly grown in the city. Here are a handful of the events you will want to check out this month. And feel free to tag me (@BKLYNbeerbitch) or the Good Beer Seal (@goodbeerseal) on Twitter for RTs; I want to know what you’re drinking and where you’re headed in July.

My favorites for the month include: